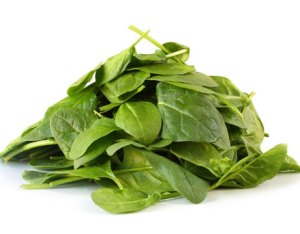 You know those days when you eat like a complete slob? Chocolate chip pancakes with maple syrup and a coffee for breakfast. Slice of pizza on the run for lunch with a tall sugary beverage to wash it down. Fast forward to a big juicy cheeseburger with fries for dinner. And of course, a 100 calorie snack pack for the wind down during Grey’s Anatomy (don’t want to fill up too much before bed). If the old adage, “You are what you eat” is true then on those days you are a sugar filled, g.m.o. flowin’, gluten-overloaded mess, with a side of caffeine. Maybe you should make it up to yourself by going vegetarian for a week.

Tonight, I am proud to say I am spinach. I made a gigantic spinach salad for dinner and it was delicioso. In essence, I am “organic” spinach.

If I were conventional spinach, I would be Permethrin, Imidacloprid, DDE, Spinosad A, Spinosad D, Cypermethrin, Flonicamid, Boscalid, Methoxyfenozide, Pyraclostrobin, DDT and much more. In fact, a total of 48 pesticide residues were found on spinach as reported in the 2009 USDA Pesticide Data Program.

A new study out of Harvard shows that even small amounts of a common pesticide class can have dramatic effects on brain chemistry. Organophosphate insecticides (OP’s) are among the most widely used pesticides in the U.S. & have long been known to be particularly toxic for children. This is the first study to examine their effects across a representative population with average levels of exposure. Finding :: Kids with above-average pesticide exposures are 2x as likely to have ADHD.

So think of this post the next time you are at the grocery store buying your fruits and veggies. Below is the 2011 Shopper’s Guide from the Environmental Working Group (EWG) to help you on your journey to becoming an organic freak like me. You can also find out what’s on your food? at Pesticide Action Network .  What’s On My Food? is a searchable database designed to make the public problem of pesticide exposure visible and more understandable. 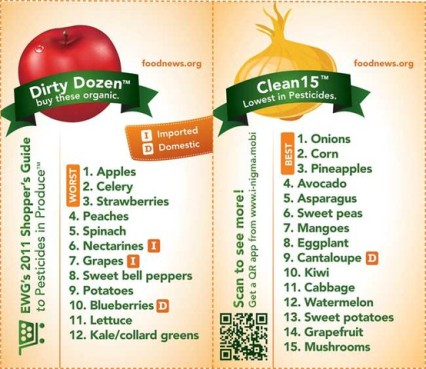 EWG’s 2011 Shopper’s Guide to Buying Organic
Hope you all have a happy & healthy day.
dr. lisa.

Owning and 'OM'ing my way through motherhood one tree pose and savasana at a time.